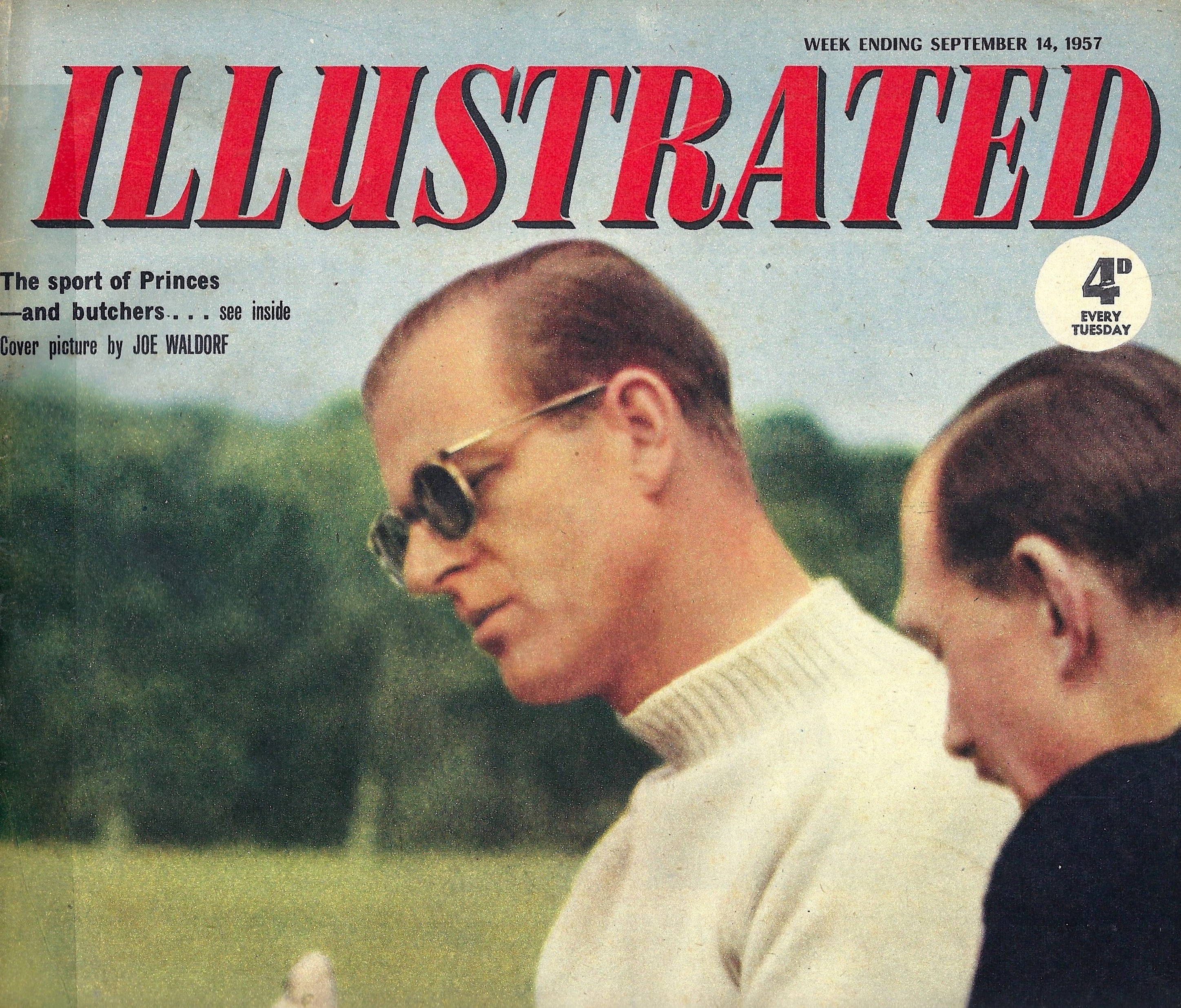 "Health from Another World?"

An extract from Maurice Barbanell's book 'This Is Spiritualism',
as published in Illustrated magazine, September 14th 1957 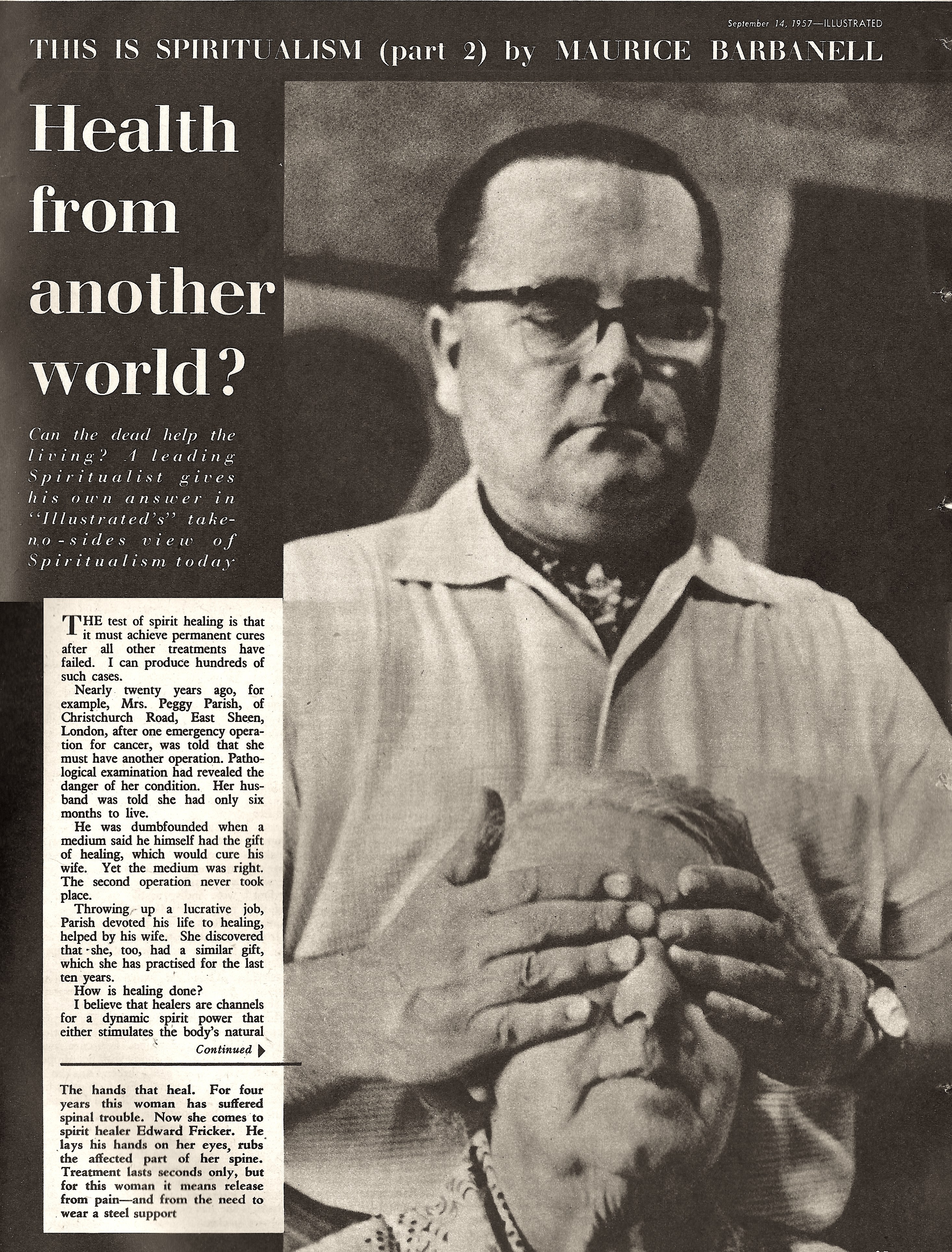 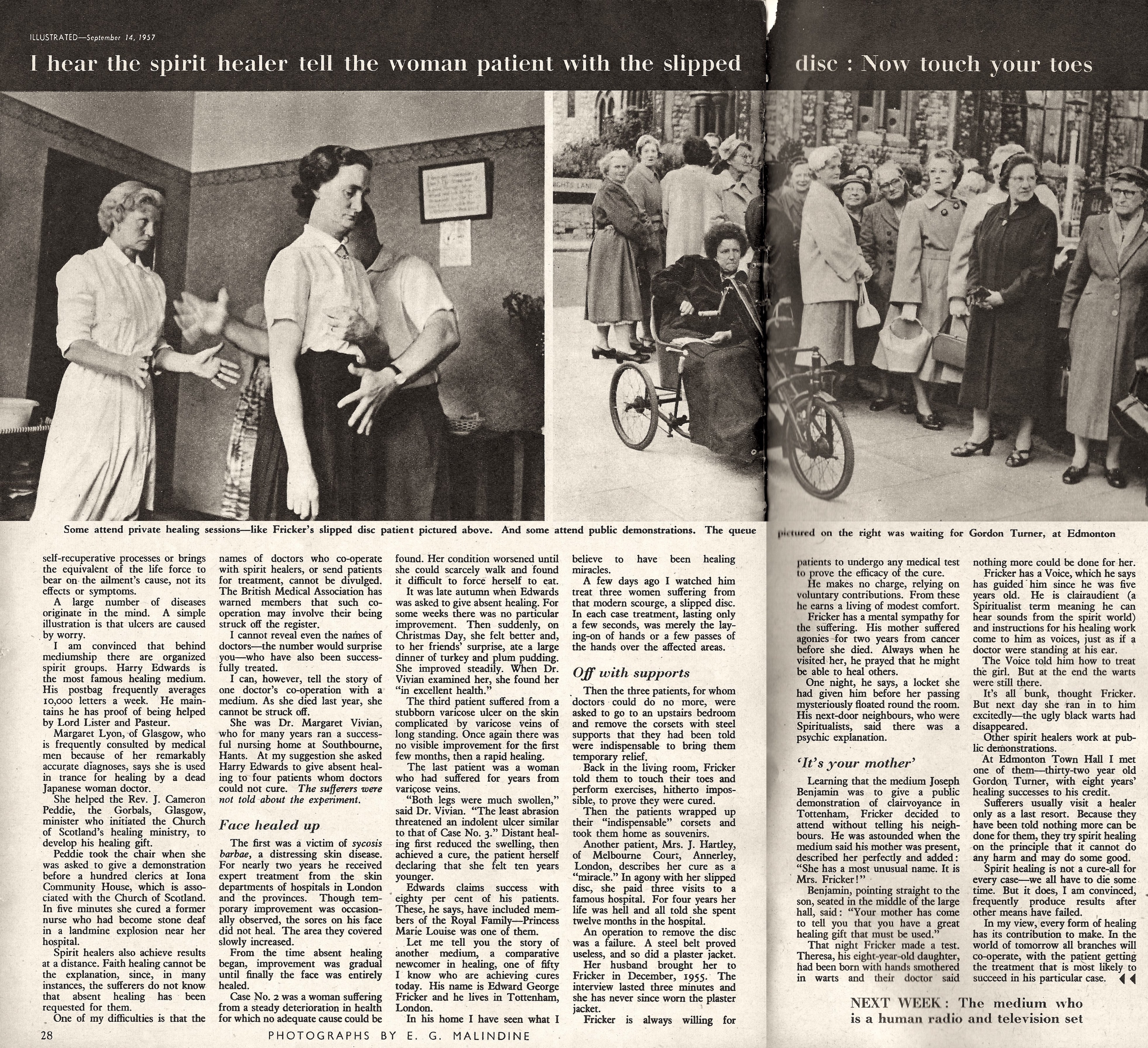 Health from another world?

Can the dead help the living?

A leading Spiritualist gives his own answer
in Illustrated’s take-no-sides view of Spiritualism today...

PHOTO: The hands that heal.
For four years this woman has suffered spinal trouble.

Now she comes to spirit healer Edward Fricker.
He lays his hands on her eyes, rubs the affected part of her spine.
Treatment lasts seconds only, but for this woman
it means release from pain - and from the need to wear a steel support.

The test of spirit healing is that it must achieve permanent cures after all other treatments have failed.
I can produce hundreds of such cases.

Nearly twenty years ago, for example, Mrs. Peggy Parish, of Christchurch Road, East Sheen, London,
after one emergency operation for cancer, was told that she must have another operation.
Pathological examination had revealed the danger of her condition.
Her husband was told she had only six months to live.

He was dumbfounded when a medium said he himself had the gift of healing, which would cure his wife.
Yet the medium was right. The second operation never took place.

Throwing up a lucrative job, Parish devoted his life to healing, helped by his wife.
She discovered that she, too, had a similar gift, which she has practised for the last ten years.

How is healing done? I believe that healers are channels for a dynamic spirit power
that either stimulates the body’s natural self-recuperative processes
or brings the equivalent of the life-force to bear on the ailment’s cause,
not its effects or symptoms.

A large number of diseases originate in the mind.
A simple illustration is that ulcers are caused by worry.

I am convinced that behind mediumship there are organized spirit groups.
Harry Edwards is the most famous healing medium. His postbag frequently averages 10,000 letters a week.
He maintains he has proof of being helped by Lord Lister and Pasteur.

Margaret Lyon, of Glasgow, who is frequently consulted by medical men
because of her remarkably accurate diagnoses,
says she is used in trance for healing by a dead Japanese woman doctor.

She helped the Reverend J. Cameron Peddie, of the Gorbals, Glasgow,
minister who initiated the Church of Scotland’s healing ministry, to develop his healing gift.
Peddie took the chair when she was asked to give a demonstration
before a hundred clerics at Iona Community House, which is associated with the Church of Scotland.

In five minutes she cured a former nurse who had become stone deaf
during a landmine explosion near her hospital.

Spirit healers also achieve results at a distance. Faith healing cannot be the explanation,
since, in many instances, the sufferers do not know that absent healing has been requested for them.

One of my difficulties is that the names of doctors who co-operate with spirit healers,
or send patients for treatment, cannot be divulged.
The British Medical Association has warned members that such co-operation
may involve their being struck off the register.

I cannot reveal even the names of doctors – the number would surprise you
- who have also been successfully treated.

I can, however, tell the story of one doctor’s co-operation with a medium.
As she died last year, she cannot be struck off.

She was Dr. Margaret Vivian, who for many years ran a successful nursing home at Southbourne, West Sussex.
At my suggestion she asked Harry Edwards to give absent healing to four patients whom doctors could not cure.
The sufferers were not told about the experiment.

The first case was a victim of sycosis barbae, a distressing skin disease.
For nearly two years he received expert treatment
from the skin departments of hospitals in London and the provinces.
Though temporary improvement was occasionally observed, the sores on his face did not heal.
The area they covered slowly increased.

From the time absent healing began, improvement was gradual
until finally the face was entirely healed.

Case number two was a woman suffering from a steady deterioration in health
for which no adequate cause could be found.
Her condition worsened until she could scarcely walk and found it difficult to force herself to eat.

It was late autumn when Edwards was asked to give absent healing.
For some weeks there was no particular improvement. Then suddenly, on Christmas Day,
she felt better and, to her friends’ surprise, ate a large dinner of turkey and plum pudding.
She improved steadily. When Dr. Vivian examined her, she found her “in excellent health.”

The third patient suffered from a stubborn varicose ulcer on the skin complicated by varicose veins of long standing. Once again there was no visible improvement for the first few months, then a rapid healing.

The last patient was a woman who had suffered for years from varicose veins.
“Both legs were much swollen,” said Dr. Vivian.
“The least abrasion threatened an indolent ulcer similar to that of patient number three.”
Distant healing first reduced the swelling, then achieved a cure
– the patient herself declaring that she felt ten years younger.

Edwards claims success with eighty percent of his patients.
These, he says, have included members of the Royal Family – Princess Marie Louise was one of them.

Let me tell you the story of another medium, a comparative newcomer in healing
– one of fifty I know who are achieving cures today.
His name is Edward George Fricker and he lives in Tottenham, London.
In his home I have seen what I believe to have been healing miracles.

A few days ago I watched him treat three women suffering from that modern scourge, a slipped disc.
In each case treatment, lasting only a few seconds, was merely by the laying-on of hands
or a few passes of the hands over the affected areas.

Then the three patients, for whom doctors could do no more,
were asked to go to an upstairs bedroom and remove the corsets with steel supports
that they had been told were indispensable to bring them temporary relief.

Back in the living room, Fricker told them to touch their toes and perform exercises,
hitherto impossible, to prove they were cured.
Then the patients wrapped up their “indispensable” corsets and took them home as souvenirs.

Another patient, Mrs. J. Hartley, of Melbourne Court, Annerley, London, describes her cure as a “miracle.”
In agony with her slipped disc, she paid three visits to a famous hospital.
For four years her life was hell and she spent twelve months in the hospital.
An operation to remove the disc was a failure. A steel belt proved useless, and so did a plaster jacket.

Her husband brought her to Fricker in December, 1955.
The interview lasted three minutes and she has never since worn the plaster jacket.

Fricker is always willing for patients to undergo any medical test to prove the efficacy of the cure.
He makes no charge, relying on voluntary contributions. From these he earns a living of modest comfort.

Fricker has a mental sympathy for the suffering.
His mother suffered agonies for two years from cancer before she died.

Always when he visited her, he prayed that he might be able to heal others.

One night, he says, a locket she had given him before her passing mysteriously floated round the room.
His next-door neighbours, who were Spiritualists, said there was a psychic explanation.

Learning that the medium Joseph Benjamin was to give a public demonstration of clairvoyance in Tottenham,
Fricker decided to attend without telling his neighbours.
He was astounded when the medium said his mother was present, described her perfectly and added:
“She has a most unusual name. It is Mrs. Fricker!”

Benjamin, pointing straight to the son, seated in the middle of the large hall, said:
“Your mother has come to tell you that you have a great healing gift that must be used.”

That night Fricker made a test. Theresa, his eight-year-old daughter, had been born with hands smothered in warts
and their doctor said nothing more could be done for her.

Fricker has a ‘Voice’, which he says has guided him since he was five years old.
He is clairaudient (a Spiritualist term, meaning he can hear sounds from the spirit world)
and instructions for his healing work come to him as voices, just as if a doctor were standing at his ear.

The Voice told him how to treat the girl, but at the end, the warts were still there.
‘It’s all bunk’, thought Fricker.
But next day she ran in to him excitedly – the ugly black warts had disappeared.

Other spirit healers work at public demonstrations. At Edmonton Town Hall I met one of them
– thirty-two year old Gordon Turner, with eight years of healing successes to his credit.

Sufferers usually visit a healer only as a last resort.
Because they have been told nothing more can be done for them,
they try spirit healing on the principle that it cannot do any harm and may do some good.

Spirit healing is not a cure-all for every case – we all have to die some time.
But it does, I am convinced, frequently produce results after other means have failed.

In my view, every form of healing has its contribution to make.

In the world of tomorrow all branches will co-operate,

with the patient getting the treatment that is most likely to succeed in each particular case.